Ramping up exposure of movie character Ron Burgundy, everyone from movie insiders to general audiences are seeing how Anchorman 2’s elaborate social media marketing plan is panning out. 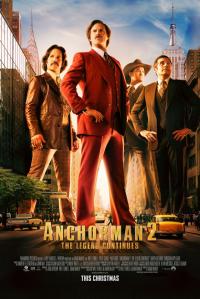 Image by Paramount Pictures via imdb.com

Rare for a mainstream big budget movie, the marketing team behind the movie has seemed to embrace the idea of user generated content. The content created by fans has been used to further the brand of Ron Burgundy.

Many people are quick to analyze what success is coming out of the movie’s marketing plan. GIFs are starting to be looked at as an effective tool in selling what a movie is about. Things like fan constructed GIFs are able to provide small tidbits and one-liners that give a sample of what the movie has to offer. Others point to the several cross-promotional things as the reason the movie will be successful (Ben & Jerry’s Ron Burgundy ice cream flavor, Ron Burgundy Dodge Durango ads).

Taking a step back, it can be noticed there is no one thing that drove people to go see Anchorman 2. It was a combination of factors. Not many expensive (and often skipped over with DVR) TV ads and talk show visits were needed. User-generated content like GIFs and fan submitted photos were encouraged by the movie’s marketing team. Free or low-cost tools like Tumblr, Twitter, and YouTube videos and contests were used to ramp up the brand of Ron Burgundy.

Director Adam McKay mentioned in an Entertainment Weekly piece that the super stacked Burgundy appearances were worth around $20 million in free publicity.

Whether the cross promotion, appearances, and various events paid off is up for debate. Anchorman 2 went on to make 40 million over its five days at the box office (Weds. through Sunday). Over the actual three-day weekend however, it made 26.8 million. The original Anchorman opened up in July 2004 to 28 million.

Despite any negative predictions, Anchorman 2 is expected to fare well and more than double its production budget of $50 million.