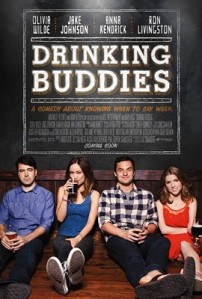 The film, made for less than $1 million, stars well-known actors Olivia Wilde (Tron Legacy), Jake Johnson (Fox’s New Girl), Anna Kendrick (Up In The Air, Pitch Perfect), and Ron Livingston (Office Space). The improvisation is the thing most interesting about this film. Director Joe Swanberg only gave the actors outlines with plot points and what had to happen for each scene. Being a romantic dramedy detailing the status and complications of a relationship, the dialogue comes through very real and touching. The movie is set in a brewery and follows Wilde and Johnson’s character interactions along with their respective partners. A-

Related: Before Sunrise/Sunset, Like Crazy (Although it’s slightly more “light” in mood than these)

Aura (Lena Dunham) returns to her parent’s home in Tribeca with no job and a film studies college degree.  She is stuck in the weird stage (that many college grads face) where she is post-grad but not yet in the real world. The film, shot for just $65,000 is not for everyone. The pacing is slow and nothing seems to be going on at first. Dunham shows the numbness that many (nervous, desperate, helpless) recent graduates feel but she doesn’t seem to give much more. Aura never does more than just shuffle around hopelessly. It’s a phase that many recent college graduates have but not of an extendedly long period. B-

Related: Perks of Being A Wallflower, Giant Mechanical Man